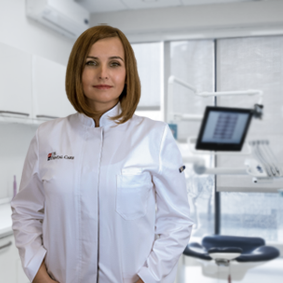 Primary specialization in Evdokimov MGMSU at the Department of Hospital Orthopaedics, specialty - dentist-orthopaedic.

Dr. Nemeshayeva started her work at the clinic as assistant to Chief Physician A. Anastos. Since 2010 he has been working as a doctor.